There was a lot of wind predicted for the 3th of October. When I arrived the big guys were rigging 6.2 and their speed guns were ready to go. At that moment the wind wasn’t hard at all so I also rigged the 6.2 and I took my smallest board the SL56.
On the water the wind was really on/off and the course was very board. It was hard to get going from time to time and I saw the big guys swimming a lot. I decided to take a bigger board to at least be able to do some fun surfing. I also replaced the speed fin with the good old SL7 which takes loads of pressure. Now I was cruising around and having fun. I even managed to do some very broad runs without falling dead in the end.
Then the wind direction changed and the wind suddenly increased a lot. I saw one of the best Dutch speed surfer rigging his 5.1. I decided to pack in and leave.
When I downloaded the GPS I saw a very decent top speed of 65,77 kmh which is probably the fastest I sailed the SL61. I was even more surprised when I put the day ranking in 500m. I had sailed the 5th fastest 500m which was a new record for me. 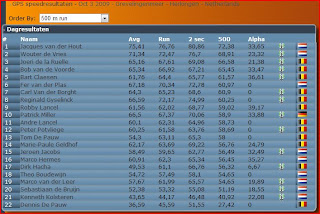