On the 28th of August I went surfing again at Herkingen. When I arrived there the wind was already blowing more then 22 knots average. The wind predictions for that day were 15 to 17 knots. I only brought my big stuff. The smallest sail I had with me was the 6.2. By the time I went on the water the wind was still increasing. I choose to put an Select Caspar Speed 27 fin under my Exocet SL56. 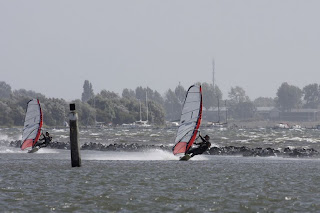 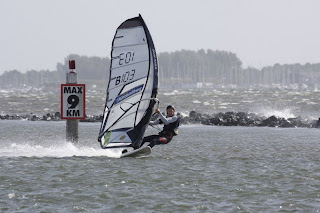 Koen
On the spot were about 30 people speedsurfing at the same time. The wind angle was not optimal and you had to bear away from the dam into the chop to get a decent topspeed. I say some people crashing with broken carbon masts and carbon booms as a result. 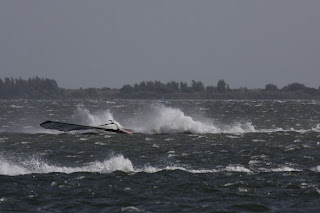 Next season I will replace my RS6 sails with the new RS Slalom MK IV. The current RS Slalom MKIII looks very stable in high wind and has a shorter luff – and boomlength. Some people say the the MKIII is as good as the EvoII sails for speedsurfing.
Geplaatst door Bart B-88 op 2:42 PM