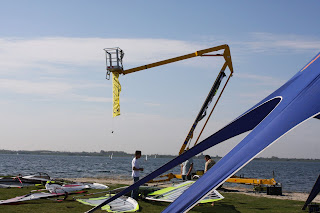 Tower
The first leg of the 3Games took place at the Brouwersdam. The 3 Games is a low entry windsurf competition organized by some Belgium competition windsurfers.
On the first day there wasn’t much wind in the morning. Therefore some fun races were organized. The windlimit for the official races was 12 knots. There is no material restriction so in the morning the formula guys were winning.
In the afternoon the wind started to pick up. We were ready for the first official race. Just before the start of the first official race the wind shifted completely. The race committee had their hands full to set a new course.
We were ready for the restart. There were 36 competitors and when the start was given we noticed that the starting line was a bit small. There were some people falling at the start and someone even hit the starting boat. During the race I was just behind Kurt. Kurt had started form the back of the field but he was able the plane over the starting line. I started for the front of the field but was standing still on the starting line. He was using an 85 cm wide board and a 9.5 sail. I was on my Exocet SL71 with an 8.4 sail. My speed was good but I could not overtake him. The race committee had placed the buoys at a very short distance. Once you got up to speed you had to jibe again. Felt a bit like indoor surfing but this certainly increased the adrenaline and fun. I took 11th place he was 10nd. It surprised me that surfing a race is a different thing than free surfing. The water is very rough and you need a bigger sail the get going.
The second official race. In the meantime the race officials had reset the course and the legs were now a lot longer. The same scenario at the starting line, Kurt starting for the back with wind and myself starting from the front but stalling at the starting line. Again Kurt in front of me and I was trying to catch him. At the last jibe Kurt had some bad luck. A competitor who was already 2 legs behind fell in the water just in front of the buoy. She was trying to get her sail out of the water but fell in again. Kurt had to do everything possible to avoid a crash and he missed his jibe. I came behind and no problem gibing and could overtake him.
My overall result was 8th place. Very happy with that. I’m already looking forward for the next 2 events in September. 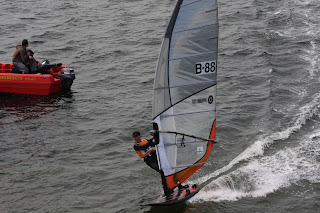 Picture from the Tower 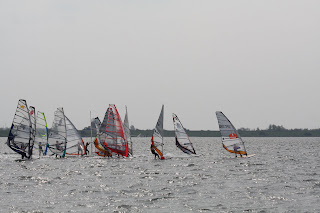 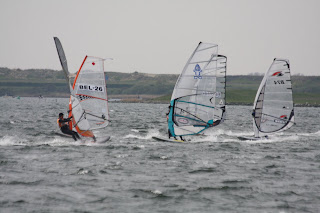 One leg to go 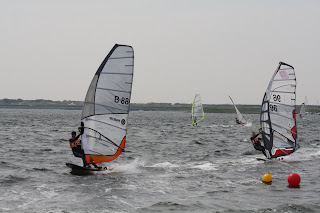