My first vacation to the Lake Garda in Italy. I heard of some good wind conditions in the summer and I decided to give it a go. I camped in Torbole. In the morning there was a slight breeze coming from the North. Not really enough wind to go out. In the afternoon the wind came from the South. This wind is called the ORA. The morning wind is called the PELER.
It is difficult to start from the town of Torbole because the wind is not as strong near the coastline as it is let’s say 200 meters from the shore. The best starting place in Torbole with ORA wind is the parking place near the windsurf school Conca. (You will have to pay 8 euro’s a day to park your car there) The ORA wind will blow from about 2:30 pm till 6:00pm with a force 3 to 5 beaufort.
After one week in Torbole I heard from another windsurfer that the PELER wind is much stronger in the morning in Malcesine. There is a bus-parking there were you can park. The PELER will blow from 6 am till 9:30 am. One morning I tried to leave the camping early to go to Malcesine. Unfortunately I couldn’t leave the camping before 7 am because the gate was still closed. When I arrived at the bus-parking about 7:20 am there was not one parking space left. About 50 to 60 windsurfers were already out on the water!
The ORA and PELER winds are best in the summer when the temperatures are high and there are no clouths. One exception to this is the wind you can get after a thunderstorm. Then you can have 6 to 7 Beaufort for a couple of hours.
The Lake Garda itself has clear blue water. The water is coming from several mountain rivers. The water temperature in august was about 21° Celsius in Torbole. I also visited the following towns in the north of the Lake. Riva Del Garda (good food, nice market places), Limone (famous for Lemon agriculture), Torbole (windsurf), Malcesine (beautiful town and castle). In the south of the Lake you have a completely different landscape. The lake is no longer surrounded with mountains and the lake is much wider. The towns Lazise (within walls) and Sirmione (island within Garda Lake only connected with the main land with a small road) are also worth visiting. 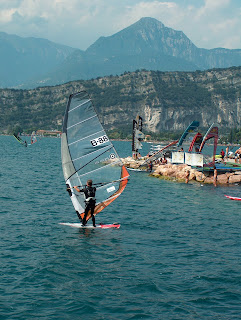 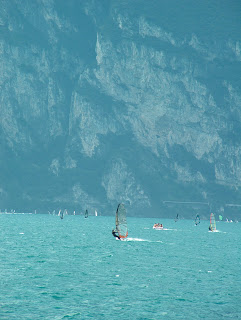 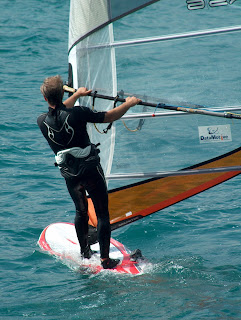 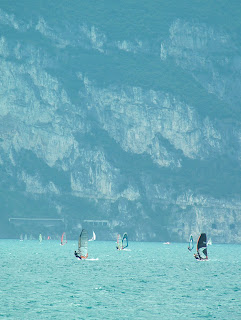 Andrea Cucchi and myself. 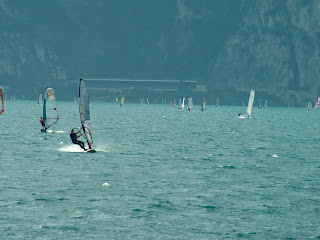 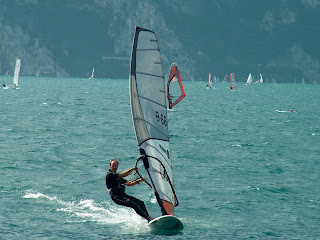