Ouddorphaven 06/05
To make it a tradition I went surfing again on my birthday. Last year I was lucky and I could break some PR’s at Herkingen on that day. This year the wind was N to NNO so I went to Ouddorp haven in the afternoon. The wind was a bit on/off and I was on my P7 AC-1 6.3 for the first time. The sail wasn’t rigged 100% and I couldn’t get the trim of the board right. I also made the mistake of choosing a fin which was a bit to big and a sail that was a bit too small. There were 2 other guys using a real speedboard with a 7.0 and that proved to be more efficient. However I’m still pleased with the speeds since I was also getting used to the spot. It has some really shallow area’s which made me surf with the brakes on. There was also some rolling chop on the speed course. I think this spot will work better with NO winds.

Kessenich 24/05
There was more wind predicted inland than at the coast on Monday the 24th. Time to check out Kessenich again. It had been a long time that I went surfing there. Kessenich has quite large gravel extraction which is filled with water from the “Maas”. The disadvantage is that you also have a lot of boats during non-working days. The best winds are winds from the East. Today the wind was North. A bit gusty but fairly strong in the gusts. My surfmate and me both took the SL78. He was on the RS Racing 9.0 and I was on the P7 AC-1 8.7. Although there were a lot of wind holes we were planning all the time and had al lot of fun. I also got some good reactions from the locals on the P7 sails. “Looks very nice on the Black Machine” it sounded. I think I will be going more there for afterwork sessions because of the short drive. Another nice thing there “freshwater and a nice beach”. 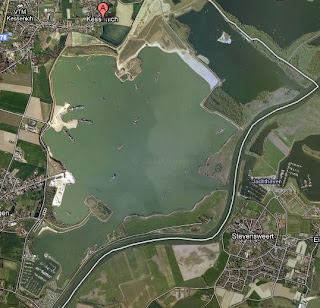 G-dam 29/05
Wind from the South at the G-dam. A lot of people were waiting for the wind to increase but they were mislead by the trees the covered the wind. Out on the water there was enough wind to plane. Very pleased with the low wind performance of the P1 AC-1 8.7 with the Exocet SL78. My secret weapon for lowwind is an old JP Slalom 48cm fin in G-10 which I made a bit thinner. Works great.

G-dam 30/05
Wind in the morning coming from NW then N then W. Went to the “boothelling” and waited for the rain to stop. Then drove back to the G-dam and the wind again turned from N to W. It stopped raining. I went out with the AC-1 7.1 with the SL78. (Gusty) Then the wind increased and I took the SL61. I had mounted the backstraps to the last holes. This didn’t work in combination with the 7.1 and the chop. Then the wind increased even more and I wished I had the 6.3 ready. I went to the beach and at that moment a thundercloud was passing by with a lot of wind. I was glad I was on the beach. After that the wind decreased a lot. End of day for me.
Very difficult conditions and I was always on the water with the wrong set.
Geplaatst door Bart B-88 op 10:37 AM