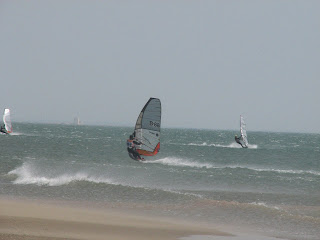 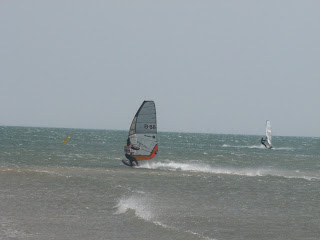 It had been very nice weather the week before we left to France. We drove to the South and the closer we came to Gruissan the worse the weather became. We left in Belgium in 20° C plus with sun and we arrived in the South of France with less than 10°C and rain on Saturday.
Sunday the same bad weather. Cold, rain but there was a Tramontana wind. I didn’t feel like going surfing in these conditions.
Monday, the first day of the competition and there was still some Tramontana left. It didn’t seem that hard in the morning but when I tested the 6.2 with the SL56 it became clear that I needed a smaller sail. Very hard gusts. I was still rigging the 5.4 when heat 1 had already started. I managed 2 runs but I wasn’t that confident and waited till the end of the race.
After heat 1 I did some runs, did some tuning and my confidence was growing. It had been more then a year ago that I used the 5.4.
Then heat 2 started. I did a couple of good runs but in the gusts the fin was a bit too big. Then the wind was decreasing and shifting a bit. I wanted to get the 6.2 but I couldn’t reach the beach where the sail was. Every time I was going towards the beach I got a gust and I decided to go for another run. Unfortunately the gusts didn’t last long enough the make a good 500m run.
After one hour the heat 2 was put on hold.
On Tuesday the weather got even better but no wind at all. The Tramontana didn’t came back for the rest of the week and the competition was over.
I recommend every speed windsurfer to try this competition once. The Belgian Speedweek is very well organized and accessible to every speed windsurfer. Everyone gets his go, Pro or Rookie and the Rescue is excellent with 1 dingy and 1 powerful jetski.

(Pictures thanks to Herman Maes and Jan Dejonge) 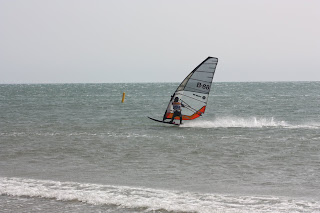 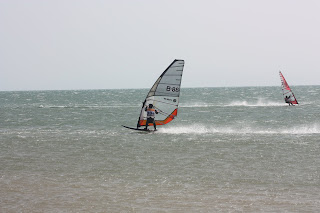